The Assemblyman for Ayigya-Ahenbronum was the elder brother of the Medical Director of Kwadaso SDA Hospital who also died of the disease last week.

Mr Kwabena Boateng, the first Presiding Member for Oforikrom Municipal Assembly reportedly collapsed and was rushed to a private hospital where he was pronounced dead on arrival at about 9 a.m. on Sunday.

News of his death hit the family which had gathered for the one week rites of the departed doctor.

Nhyira News sources at the Ashanti Regional Directorate of Ghana Health Services say the state has since taken over the body, initially deposited in a private morgue.

Mr Kwabena Boateng, also known as ‘Agenda’ had been unwell for some time, even before the passing of his brother.

Checks reveal his samples were taken some days before his death. He died before he test results confirmed him he was positive for coronavirus. 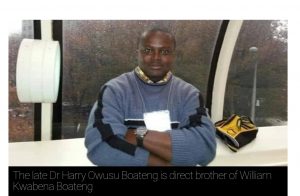 Nhyira News sources say Mr Boateng voted in Saturday’s NPP primaries at Ayigya, identified as a hotspot for Covid-19 in the Oforikrom Municipality.

Sources say authorities at the Regional Health Directorate will supervise his burial after transferring the body from the private morgue to the Komfo Anokye Teaching Hospital morgue.

Mr Kwabena Boateng was regarded as an all-round sportsman during his senior high school days at the KNUST Senior High School.

He remained an active member of the old students association, TECHSOSA until his demise after leaving school in 1992 .