A family in the Kwabre District of the Ashanti Region is demanding justice after a police chase of a commercial mini-bus (trotro) ended in an accident which claimed the life of their 65-year-old mother.

According to reports, police pursued the mini-bus after the driver had allegedly flouted the directive to wear a face mask to prevent the spread of coronavirus in public transport.

In an attempt to outrun the police, the crashed into a stationary vehicle, the accident resulting in the death of Janet Adomako and seriously injuring other passengers on board.

Close to a month after the accident, Janet’s daughter who was also aboard the vehicle is still bedridden. 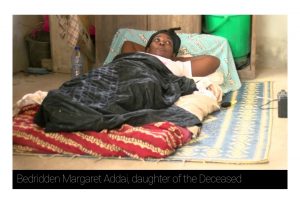 Lying on a mattress inside the family house, 33-year-old, Magaret Addai cannot walk after the near-death encounter on May 19th this year.

On that fateful day, Magaret explains, her deceased mother, husband and brother-in-law joined a Kumasi-bound commercial vehicle from the Abirem station.

Few minutes after the vehicle left the station, Police signalled for the bus to stop and the driver was asked to wear a face mask.

According to Magaret, the driver after waiting for a while sped off and the passengers thought the driver was done engaging the police.

But later, they realised the police were following them.

“So we asked the driver to stop but he said he will be arrested so he sped off and so the police continued chasing until the vehicle crashed.”

The 33-year-old says after the vehicle crashed, she held her mum, called her several times but she was unresponsive. 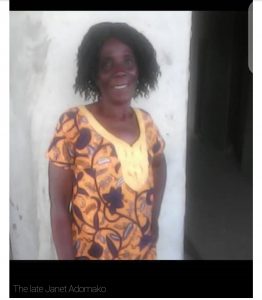 The mother of three, her brother-in-law, her mother, and husband, together with other victims were rushed to separate hospitals for treatment.

Luv News followed up to the scene of the incident. We saw the driver of the commercial vehicle at the Kenyasi station.

He refused to speak on record, but explained he was stopped by the Police that day and asked to wear a face mask. After waiting for the police for while he decided to leave the scene.

He said the police started chasing him from Abirem to Kenyase on the Antoa road. The hot chase continued to Tafo Adwumam where the accident occurred.

“There was a vehicle parked here. We saw another vehicle coming on a top speed towards this direction,” one eyewitness narrated.

Another resident, Stephen Jubor, claims that the Police went after the driver’s mate while the passengers laid injured in the crushed vehicle.

“We were playing cards when we saw the policemen chasing a young man, so we taught he was a thief. Then later we realised there was an accident, so we asked the Police why they left the injured to chase the driver’s mate to beat him,” he said. 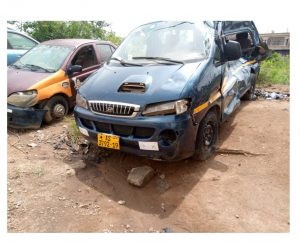 “When the doctors broke the news that my mother had passed, my younger brother who was with me fainted and hurt his head.”

He explained that his younger brother had invited their mother to come get his wife at the hospital because she had delivered when the unfortunate happened.

But weeks after the incident, the family is worried neither the police nor the driver has shown any concern.

Family of the deceased, want justice for their her.

“We want both the police and driver to be punished to serve as a deterrent for others,” both daughter and son cried out.

Margaret Addai added that she sells and supplies pawpaw with her mother. With her three children, she is worried about their upkeep and education.