Ghanaians stranded in Germany are scheduled to be evacuated from June 21 to 25.

The exercise will be spearheaded by the Ministry of Foreign Affairs and Regional Integration and the Ghanaian Embassy in Berlin.

This forms part government’s effort to alleviate the plight of government’s of national’s home and abroad from the impact of the novel coronavirus.

President Akufo-Addo some weeks ago announced the closure of land and air borders to curb the spread of Covid-19. Following the gradual easing of some restrictions, the administration has already conducted similar evacuation exercises from Kuwait and the United States. 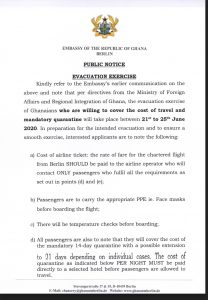 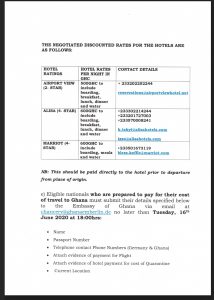 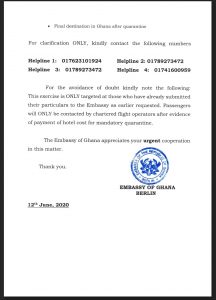 According to a statement signed by the Ghanaian Embassy in Berlin, the exercise is for only Ghanaians “who are willing to cover the cost of travel and mandatory quarantine.”

The June 12 statement, outlined a list of negotiated discounted rates for hotels available ranging from GHS500 to GHS600.

The Embassy explained that the exercise will only target “those who have submitted their particulars to the Embassy as earlier requested” adding that travellers must submit their details no later than Tuesday, June 16, 2020.

However, passengers will only be contacted by chartered flight operators after evidence of payment of the hotel.