Police in Tamale has begun investigations into the murder of a young man, Abdul-Halim, who they say tried to stop a rapist from attacking his next victim in Nyanshigu, a suburb of Tamale.

The gunman who is yet to be identified also shot his victim, Rashida Abukari in the leg.

Narrating the incident, the police in a statement said the suspect around 4:00 am on Wednesday attacked the victim in her room and tried to force himself on her.

But, when she resisted the suspect shot her in the right thigh. 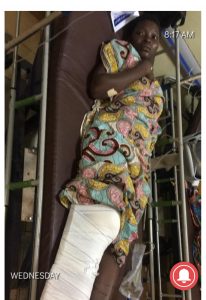 Abdul-Halim who heard of the act tried to intervene by apprehending the suspect.

But the gunman shot him and took to his heels after the act.

The body of the deceased has been deposited at the mortuary for autopsy while the victim is in stable condition and is responding treatment at the Tamale Teaching Hospital.